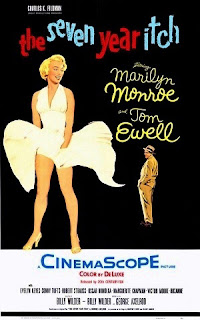 The Seven Year Itch is a 1955 romantic comedy film based on a three-act play by George Axelrod. The film was co-written and directed by Billy Wilder, and starred Marilyn Monroe and Tom Ewell. It contains one of the most iconic images of the 20th century – Monroe standing on a subway grate as her white dress is blown upwards by a passing train. 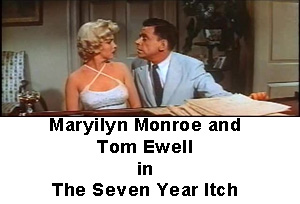 The film's entire story was an elaboration of the first scene in Wilder's directorial debut film The Major and the Minor (1942). The film is best known for the performance of the radiant Marilyn Monroe with a little girl's giggly voice basically portraying herself and known simply as The Girl in the credits. 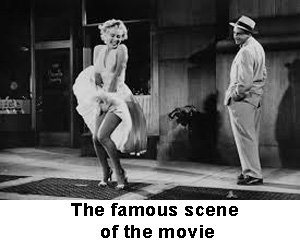 In 1956 the film won the Golden Globe award for Best Actor in a Musical or Comedy (Tom Ewell) and it was nominated for Directors Guild of America Award for Outstanding Directorial Achievement in Motion Pictures (Billy Wilder).
Posted by Janet Lynn at 11:47 AM No comments: 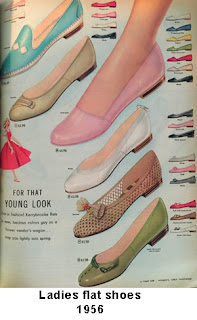 Flatties or flats in today’s lingo were popular house shoes. They were sometimes worn with pants outside of the home for casual occasions. 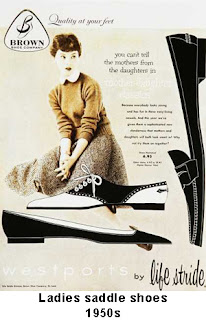 Teenagers wore them as often as saddle shoes when Audrey Hepburn declared them as her favorites. Ballet flats featured very small heels of 1/2 inch but were the most trendy, having no heels at all– just flat, flat flat!  Black was the most common color with a thin bow on the top. Other colors often matched an accessory such as a belt, scarf, purse, or hair ornament. 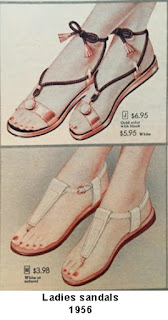 Of all the flatties brands, Capezio was the cream of the crop. They were luxury for those that could afford them, but oh so divine. They had no heels, very low profile sides, deep cut on the toes revealing toe cleavage, and sharp pointed toe tips. They exuded sexiness like no other flat could! 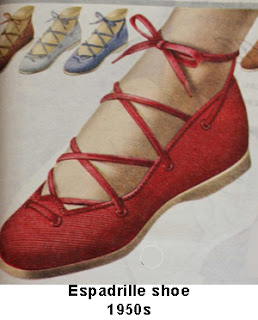 Capezio and Bernardo both created a lace-up flat called Ghillies. It was a sister to the espadrille shoe but looked more like a cross between a men’s Oxford and a ballet shoe. The long laces provided endless amusement in devising new ways to tie the straps. At the back of the ankle was the best way for 1950s espadrilles, while wrapping up and around the leg was the vogue thing to do with Ghillies. 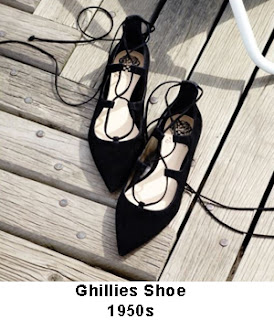 Many movies showcased women dancing in Ghillies (see if you can spot them next time you watch a 1950s musical).

Posted by Janet Lynn at 9:07 AM No comments: 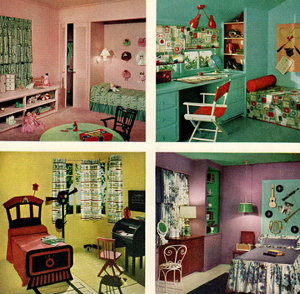 When you think of childhood bedrooms, what colors spring to mind first? For girls, probably pink, lavender or purple, for boys, blue, green or yellow. 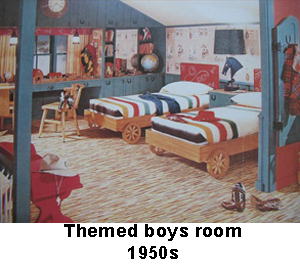 Many times the rooms featured sloping ceilings, as they have often converted attic spaces, a very tiny walk-in closet, and a small window. Wallpaper featured tiny pale yellow and green flower blossoms for girls or trucks and sports for boys. 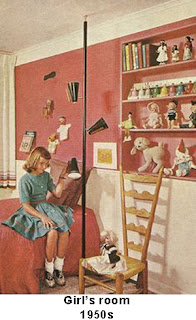 These colorful rooms were eye-catching. Each centered around a particular color while adding in accents and decor in coordinating themes. Most children's rooms were sparsely furnished but well decorated. 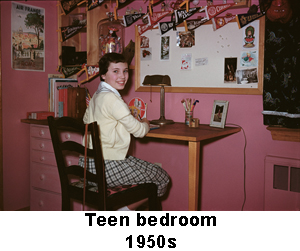 Teen bedrooms were another story. They were not necessarily pink, or blues but vibrant colors, with turquoise winning out in popularity. Themes ranged from heartthrobs to sports, to college or travel. Many times it was a mix! Again sparsely furnished but elaborately decorated.
Posted by Janet Lynn at 11:35 AM No comments: 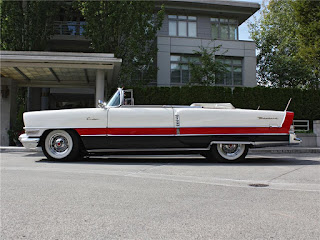 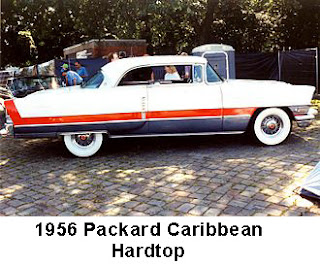 The Caribbean line was equipped with a V8 engine and the car was available in two or three-tone paint patterns. Designer Richard Teague succeeded in restyling the old Packard Senior body into a sensational, modern-looking design. Production for 1955 stood at only 500 units.
For 1956, trim differences between the 1955 and 1956 cars were slight. Total model year production equaled 263 hardtops and 276 convertibles. The model was discontinued when Packard production ended in Detroit.
It competed head-to-head with Cadillac at one time. The boldly designed Packard offered a wraparound windshield, large tail lamps, lavish interior appointments, and an aircraft-inspired instrument panel. 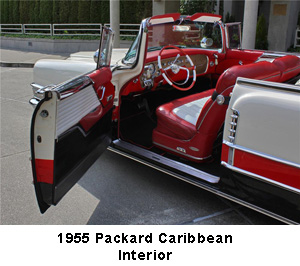 Posted by Janet Lynn at 8:47 AM No comments: 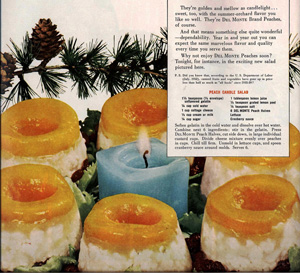 These "Candleholders" my brother and I called them were a staple in our house growing up in New York. During Autumn and Winter fresh fruit was not plentiful so canned and frozen vegetables and fruits were common.

Dissolve gelatin in cold water over hot water. Combine next 6 ingredients and stir into gelatin. Press peach halves cut side down in large individual custard cups. Divide the cheese mixture evenly among the peach halves in the cups. Chill until firm. Unmold in lettuce cups and spoon cranberry sauce inside the center of the peach half.
Posted by Janet Lynn at 5:29 PM No comments: