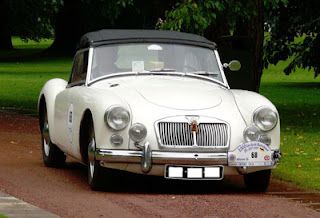 Vintage 1950s cars
MG-A
The MGA was produced by MG from 1955 to 1962.
The MGA replaced the MG TF 1500 Midget and represented a complete styling break from MG's earlier sports cars. Announced in September 1955 the car was officially launched at the Frankfurt Motor Show.
The MGA design dates back to 1951 when MG designer Syd Enever created a streamlined body for George Philips' TD Le Mans car. After several changes to the chassis, the prototype was built. As it was so different from the older MG models it was called the MGA, the "first of a new line" to quote the contemporary advertising. There was also a new engine available, therefore the car did not have the originally intended XPAG unit but was fitted with the BMC corporate B-Series type allowing a lower bonnet line. The MGA convertible had no exterior door handles. 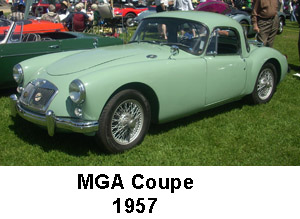 The MGA has been raced extensively in the U.S. since its 1955 introduction and with considerable success. In the Sports Car Club of America competition, the MGA has won numerous regional and national championships. It has also been a favorite choice of those competing in vintage racing.
In the United States, the MGA was used in NASCAR from 1960–63 in the Grand National Series, but failed to win a single race. After production ended of the MGA, MG (which at that point was the last foreign automaker in NASCAR) decided not to field another entry in the circuit. 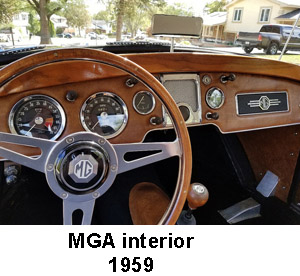 A total of 101,081 units were sold through the end of production in July 1962, the vast majority of which were exported. Only 5869 cars were sold on the home market, the lowest percentage of any British car. It was replaced by the MGB.

Posted by Janet Lynn at 7:30 PM No comments: 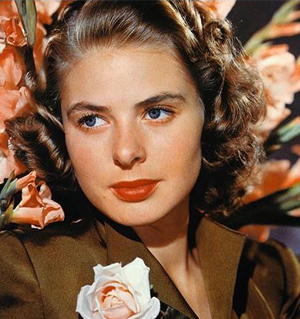 The Bergman Scandal
While doing in-depth research into 1950s Hollywood, we came across scandals that shocked and amazed us. Remember, people especially women had a special society code of decency they needed to follow. Though things were slowly changing it the 50's many women and men were caught in the web of change and did not recuperate. Really, you can't make this stuff up! 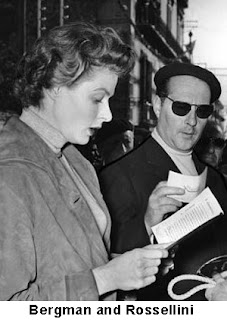 Ingrid Bergman was a Swedish actress who was known for her graceful beauty and wholesome persona. She is remembered for playing Ilsa in Casablanca. She endured a scandal that was large and profound.
She married a much older man, neurosurgeon, Petter Lindstrom and had a daughter, Pia. After producer David O. Selznick saw Ingrid's Swedish films.  He offered her a contract and she went to Hollywood.
When Bergman arrived, she refused to undergo a makeover, she didn’t want a new name, said no to thick pancake make-up, and most of all wouldn't let them pluck her bushy Nordic eyebrows. Selznick decided that Bergman’s image would be NO IMAGE AT ALL. 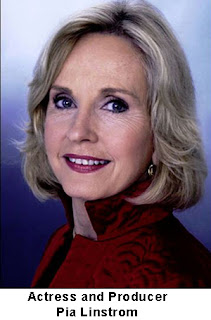 Bergman wrote a letter to Italian director Roberto Rossellini  offering to appear in his next movie Stromboli. Along with giving her the part, Rossellini immediately replaced his previous lover, Anna Magnani, with Bergman.
Rumors of an affair soon started. Her old friend and famous columnist, Hedda Hopper, interviewed Bergman who refused to admit she was pregnant.  But when Hopper’s arch-rival, columnist, Louella Parsons, announced the pregnancy days later, Hopper retaliated by shaming Bergman as much as possible.  Ed Sullivan refused to allow Bergman on his show, and she was denounced on the floor of the United States Senate as an “Instrument of Evil.” 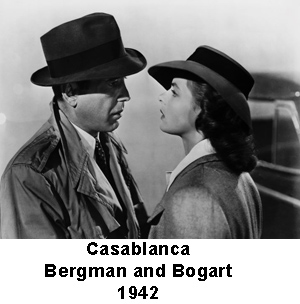 On top of that, Bergman’s husband, Lindstrom refused to grant her a quick divorce, effectively ensuring that Bergman would give birth to a “bastard child.” Bergman’s Hollywood image was damaged beyond repair. (Lindstrom granted her a divorce just days before her child was born.)
Soon after, Rossellini and Bergman married causing an international scandal.
Bergman left America, had more children with Rossellini including a pair of twins (model Isabella Rossellini), 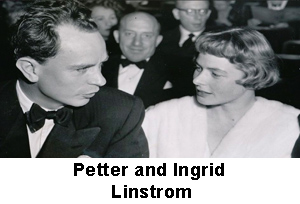 The couple divorced in1957 and Bergman’s career made a comeback. She earned another Academy Award for Anastasia in 1956
Ingrid Bergman died August 29, 1982 in London from Breast Cancer