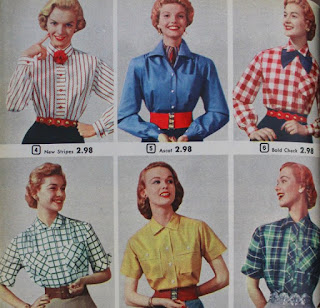 1950s Ladies Blouse Collars
The varieties of 1950s tailored tops was largely tied to the style of shirt collar.  Here are some of the common styles:
Classic collars– Pointed collars fastened to a small V neckline. They were often in white but pastels, plaids, checks and thin stripes were common too. They were the most tailored or menswear looking 1950s shirt. 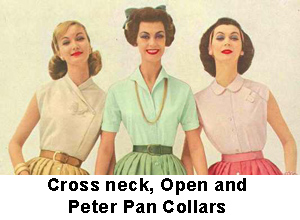 Boat necks- A fancier French name was Bateau. They were large oval necklines popular in knits that could be pulled overhead. Collars were attached to them but never stayed put very well. The “Sabrina” Bateau had two bows on either shoulder. 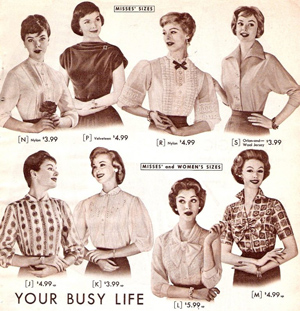 Peter Pan collar- Small round collars perfect for layering under a sweater. They flipped out over the sweater and layered on top. Small and dainty, they were a softer alternative to the point collar. 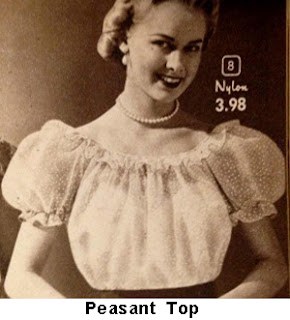 Peasant top– Bohemian chic tops with gathered necklines,  puffy sleeves and folk embroidery made the peasant top unique. They were common in the 1940s too.

Posted by Janet Lynn at 5:52 PM No comments: 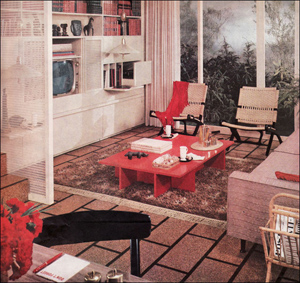 A look back at Living rooms of the '50s

The 1950s were the glory days of modern design. It lacked unnecessary ornamentation, focusing on the function, “Form follows Function.” And, there is an artistic side to things, such as referencing nature and organic shape. 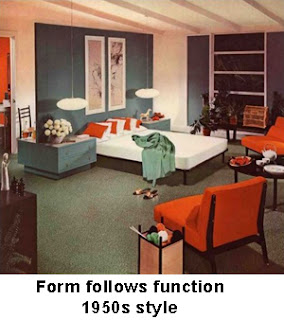 Furniture was bulky with rounded edges, a carryover from the pre-war Streamline era, like a Streamliner train.  The style was meant to look like was moving, even when was standing still. In a way, this is not really 1950s style but 1940s. But, when World War II was on, manufacturing of discretionary items like furniture almost came to a complete halt. Immediately after  the war, it seemed that manufacturers pulled out their designs from before the war and started producing them to meet immediate demands. It took a while for new design looks to be introduced. The streamline look was popular from around 1946-1953. 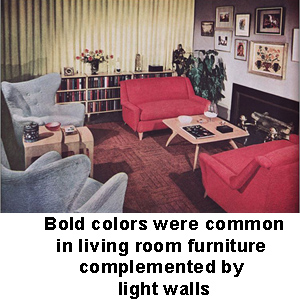 One wall of exposed brick or stone was popular in 1950s living rooms. You wouldn't see a lot of wooden furniture or fixings as it was very much the fashion in the 50s to have many of the items in your home were made of plastic. Surfaces like the coffee tables were much easier to clean made of plastics. Pastels were integral to the 1950s living room color scheme. Sofas and armchairs tended to be in deep or bold colors like red and orange. 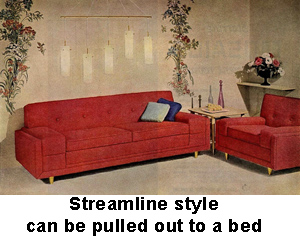 New technology added to the new homes. Introduced during the 1950s, popcorn ceilings became the norm in home decor. Along with this textured look came new colors, green, gold, orange, and yellow were all popular colors. The invention of no-wax flooring was popular.
Ranch style architecture was the still the most popular, but split level homes came in a close second.

Posted by Janet Lynn at 9:12 AM No comments: 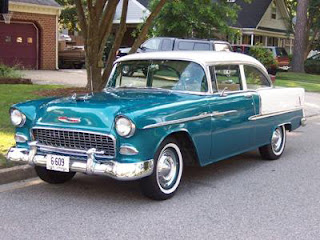 The 1955 Chevrolet (sometimes referred to as '55 Chevy) It is considered a huge turning point for the manufacturer and a major success. It was available in three models: the 150, 210, and Bel Air. 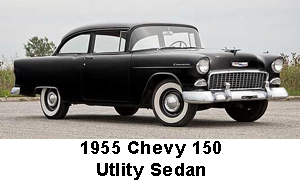 The 1955 model was the first successful Chevrolet with an optional V8 engine. Chevrolet had produced an earlier car with a V8 in 1918 (Chevrolet Series D) but it remained in production for only a year. In 1955, Chevrolet decided to fit its new car with an overhead valve V8 engine design, which was similar to the 1949 Oldsmobile "Rocket 88" V8 engine. The new V8 was designed to be smaller, lighter, and more powerful than previous V8s in the auto industry. 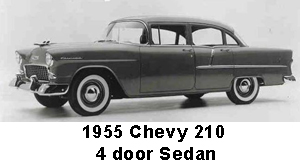 The new "small block" in the '55 Chevy had its problems, however. It had no oil filter, and the factory could only add one externally.  Those who did not order the engine with the "oil filter option" had dirty oil in a short amount of time. This was corrected the next year. The new small block V8 had an easy maintenance, and it had a built-in ability to be upgraded. The small block Chevy V8 became so popular that Chevrolet still sells a version of it today. Although there have been various changes made to the motor to modernize it, the basic design of the original 265 remains. 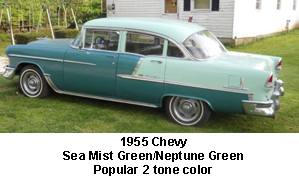 Chevrolet offered a wide array of colors for 1955. One solid color, which was standard for the 150, could be had for the 210 or Bel Air...or nineteen different two-tone color combinations were also available. Most popular colors:  solid was Harvest gold, two tone was Sea Mint Green/Neptune Green. Although most everything was new in 1955 for Chevrolet, the reliable Powerglide transmission was mostly unchanged from '54.

Posted by Janet Lynn at 9:10 AM No comments: 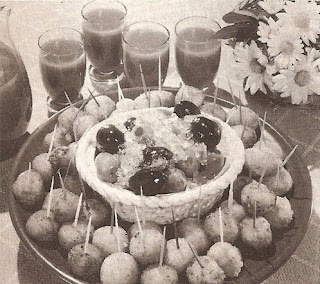 Pour into shallow plate. Cool; then refrigerate until mixture can be easily handled. Beat egg with water. Form cheese mixture into small balls; roll in dried crumbs; dip into egg mixture; then roll in crumbs again. Fry, 3 or 4 at a time, in deep fat heated to 375°F. until golden and crisp ——about 50 sec.
Drain. Cool; freezer-wrap; freeze.
To serve: Unwrap frozen balls; place on baking sheet. Bake at 400°F. 10 to 12
min., or until hot. Makes about 4 doz. 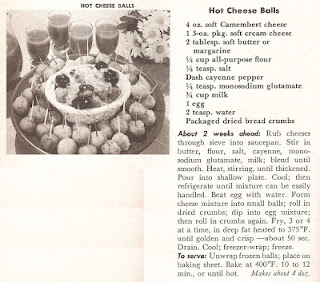 Posted by Janet Lynn at 9:08 AM No comments: 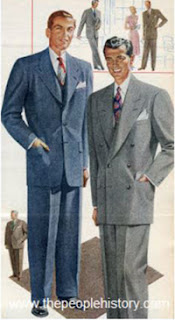 In the world of men’s fashion, suits in the 1950s are classic. Loose and in shape and cut they varied in textured fabrics- wool, tweed, flannel, and corduroy as well as patterned – big checks and plaid.
Unlike suits from the previous decades, suit jackets from the 1950s had a noticeable waistline. Shoulders remained slightly padded and wide. The collar was wider and short, so you could see more of the shirt collar
underneath. The closing button was located just below the natural waistline.

Double breasted jackets were clearly outnumbered by single breasted styles. However, they were worn by some men and featured wide pocket flaps and a low buttoning point, exposing a lot of the shirt front.

Posted by Janet Lynn at 7:49 AM No comments: