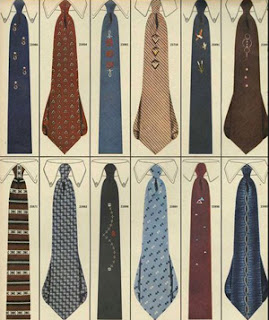 Neckties ties both narrowed and lengthened in the 1950s from the extremely wide and short tie of the 1940s. Designers also dumped the hand-painted novelty designs in favor of traditional stripes and textured solids. It made sense then that silk and shantung were perfect fabrics for men of this era. 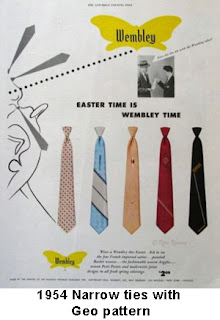 Some novelty themes did remain common- wine grapes, wine glasses, historical statues, graduated stripes, swirls, geometric art, modern art, and hobby motifs introduced some patterns to otherwise plain ties. Big patterns were part of the early ’50s and small hints of design made up the remainder of the 1950s. 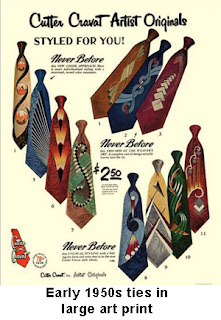 The 2-inch skinny knit/crochet tie was worn across college campuses both in solids and wide stripes.
Posted by Janet Lynn at 3:04 PM No comments: 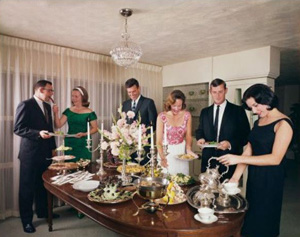 In the big cities, going to the theatre with friends for a night out was quite common. After-Theatre Parties became popular when more people began living in spacious homes or apartments. Restaurants in the city were usually booked after theatre performances, many decided, “Why not come over and have a party and a few refreshments?” Since everyone was already “dressed,” it was a great way to make the evening last longer. 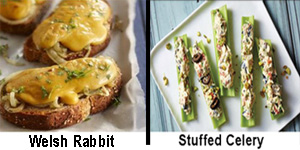 Many families moved to the suburbs in the 1950s. The husband took the train to and from work in the city. Wives often drove their husbands to the depot and picked them up in the evening. For an evening out, wives would take the train into the city and meet their husbands at the theatre. Hence dinner had to be postponed until after the performance. Couples who lived in the city would host the “after theatre” party. Slowly the suburbs began to build their own theatres and provide performances to satisfy the needs of the suburbanites for cultural events.

A suggested buffet for that time was Welsh Rarebit, Stuffed celery, Olives, Chocolate Cupcakes and fresh fruit – or broiled Grapefruit halves and Coffee. Of course, there was always the ever-present, well-stocked bar.
Posted by Janet Lynn at 2:49 PM No comments: