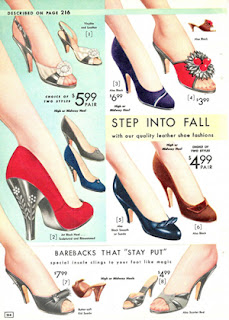 Stiletto Heeled Opera, court and pump shoes were all the rage in the early 1950s. At an extreme, they were very tall with 4-inch spiked ultra thin heels. Early on, the heels ended in a small metal cap that left dents in softwood floors, requiring some museum and courthouses to forbid stiletto shoes. The stiletto featured tall arches with a V-shaped cut away from the shoe sides.  Red was the boldest and most in-demand color for formal wear. They were impractical and mostly only worn for very special occasions, short durations, and by fashion models. 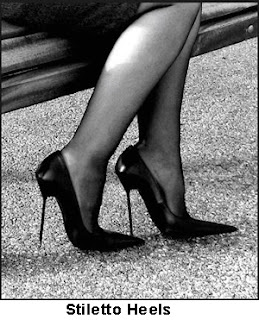 The Winklepicker was an extreme version of the already extreme opera pump. With its sharp pointy toe and high thin heel, it was trendy in the late 1950s for formal and even semi-formal at home wear.
Thicker but still shapely tall heels continued to be worn with fancy dresses. Some heels had pretty all over designs carved, painted or printed onto them, while others had decorations around the edges. 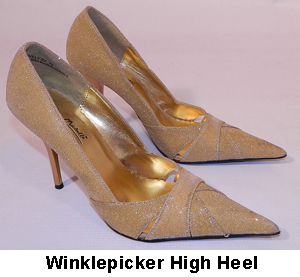 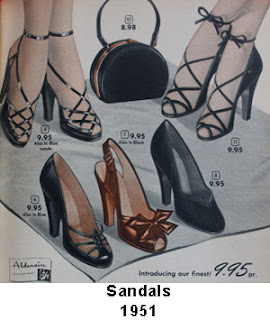 Kitten Heel Shoe After trying to balance on tall heels, most 1950s women regained their senses and accepted low but still thin kitten heel shoes. These classic dress shoes were safer to walk in yet still remained elegant and classy. Shoes were made of a soft leather or reptile skin. Suede and some fabric materials, like velvet or mesh, were used as well. Toes were very pointed in the early years and more rounded in the later years. For evening wear, jewel tone colors, especially glittery gold and dark silver, were fashionable. 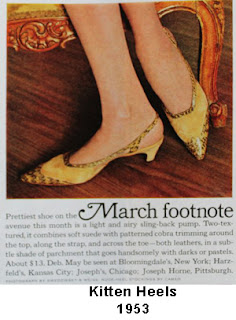 Baby Dolls. They featured very round toes that resembled a doll’s shoes. They came in many fun colors during the spring and summer, with cute accent decorations on the trim or an ornament on the vamp. 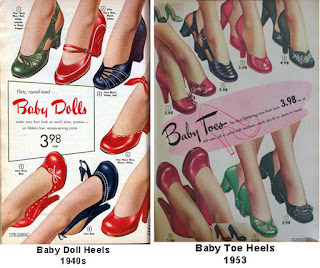 Posted by Janet Lynn at 7:34 AM No comments: 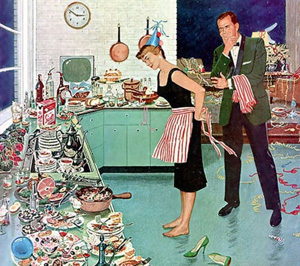 Ringing in the new year, in the 1950s, often included a midnight extravaganza at a hotel or company party. However, suburbanites soon realized that they didn't need to mingle with hundreds of people in order to have fun on New Year's Eve. A small party at home or open house with close friends and neighbors could be far more enjoyable than an evening spent jostled around by strangers and uninhibited pranksters. Twelve people were a good number, one for each month of the New Year. When old friends gathered, there was no need to plan entertainment, for time just seemed to whisk away, 'doin' what comes naturally, singing, dancing or just talking and reminiscing. And suddenly it was midnight, time for Auld Lang Syne, and supper. If you had 12 people and a large, round table one could set that table to resemble a huge clock, with one guest seated at each marked hour with two large paper hands indicating the hour. 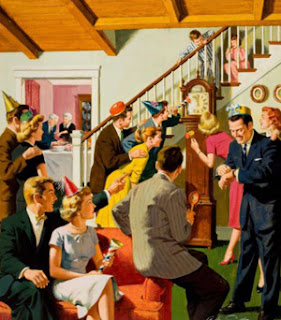 Then came the TV. Television has drastically changed New Year's Eve and Day for millions of Americans. Festive family dinners yielded to broadcasts and TV trays. Open houses replaced with TV's floats, flowers, and football. Sitting in their rocking chairs, TV viewers traveled from coast to coast and back again thru the magic of the one-eyed giant in the living room. So no longer did people have to entertain themselves, TV was the entertainment. 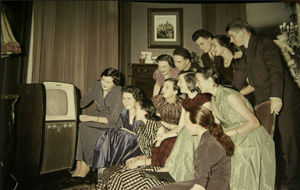 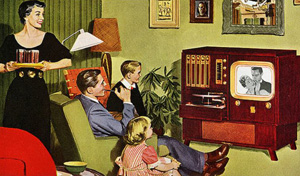 Then there was the cleanup!
Posted by Janet Lynn at 9:59 AM No comments: 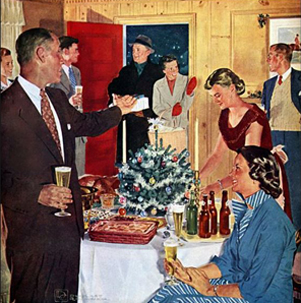 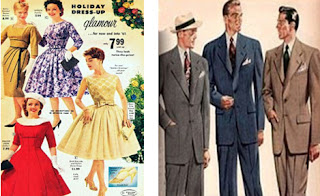 A Christmas Open House was common in neighborhoods during the 1950s. A night out for couples in suburbia that was close in proximity was a blessing. Yet, dressing up was a must. So Open Houses were lavishly decorated and all the stops were pulled by the host and hostess.
Common foods served for an Open House were buffet style and included:  Cheese balls, Broiled stuffed mushrooms, Deviled eggs, Broiled shrimp, Melon ball cocktails, Fruit cups and individual Jello molds with fruit and/or toppings.

Traditional Christmas Eve Dinner was usually a buffet or sit down dinner. Either way, it was a wonderful way to connect with friends and family the night before Christmas. Typical 1950s menu was a glazed ham, parsley potatoes, spiced peaches, cornbread, vegetable scallops, Relishes Plates (Olives, pickles, celery), Eggnog pie, coffee and salted nuts and mints.

Though the holidays were busy, turning down a lovely evening with friends, neighbors and co-workers were impossible in the 1950s. 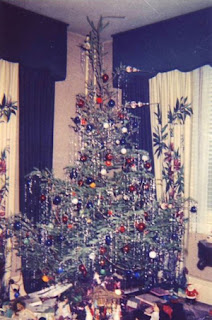 Posted by Janet Lynn at 4:40 PM No comments: 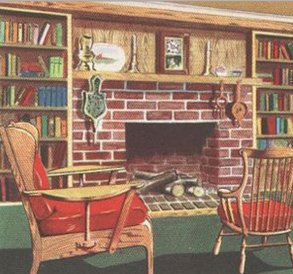 The 1950s den was probably the only room in the house where the owner can do what he pleased and arrange things as he wished without having to consider the tastes and desires. To many, it became a retreat. Therefore, the den reflected the personality and interest of the owner. His special interests were displayed in a collection of photographs, trophies, pen­nants, etc., and the bookshelves would probably show his taste in books. 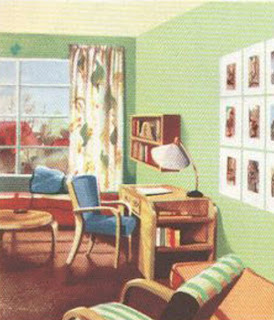 Generally, it had a restful atmosphere, with subdued colors. Wood paneling or a subtle imitation woodgrain wallpaper added to the achievement of a soft and restful room. 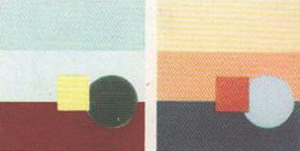 Often during holidays, family gathers would begin into the living room and spill over to the den because of the relaxed atmosphere. 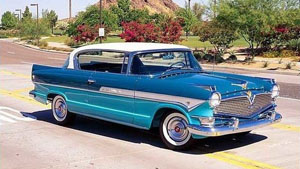 The Hudson Hornet was a full-sized automobile made by the Hudson Motor Car Company of Detroit, Michigan, between 1951 and 1954 and then by American Motors Corporation (AMC) in Kenosha, Wisconsin. It was marketed under the Hudson brand between 1955 and 1957. 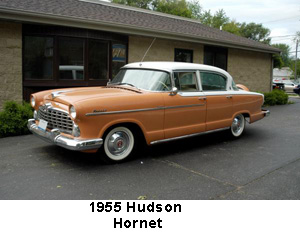 The first-generation Hudson Hornets featured a unique and functional "step-down" design with dropped floorpan and a chassis with a lower center of gravity than contemporary vehicles. This helped the car handle well – especially for racing. The Hornet's lower and sleeker look was accentuated by streamlined styling. The car's low slung appearance. Hudson an image that - many buyers wanted cars -much like Cadillac. 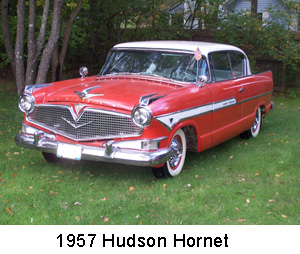 The second-generation Hudson Hornets was a restyled Nash that was engineered as a Hudson.

Claim to fame:
Hudson was the first automobile manufacturer to get involved in stock car racing. The Hornet dominated stock car racing in the early-1950s when stock car racers actually raced the same cars one could buy at a dealer. Hudson won 27 of the 34 NASCAR Grand National races in 1952, followed by 22 wins of 37 in 1953, and capturing 17 of the 37 races in 1954.

Posted by Janet Lynn at 1:52 PM No comments: