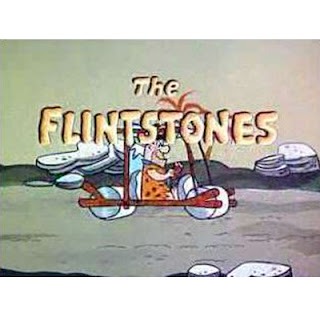 The Flintstones is an American animated sitcom produced by Hanna-Barbera. The series takes place in a romanticized Stone Age setting and follows the activities of the Flintstones a suburban family, and their next-door neighbors, the Rubbles (who are also their best friends). It was originally broadcast on ABC from September 30, 1960, until April 1, 1966, as the first animated series to hold a prime time slot.

The continuing popularity of The Flintstones rests heavily on its portrayal of modern everyday concerns in the Stone Age setting. The Flintstones was the most financially successful and longest-running network animated television series for three decades until The Simpsons debuted in late 1989. In 2013, TV Guide ranked The Flintstones the second-greatest TV cartoon of all time (after The Simpsons).

The opening and closing credits theme during the first two seasons was called "Rise and Shine", a lively instrumental underscore accompanying Fred on his drive home from work. Starting in season 3, the opening and closing credits theme were the familiar vocal "Meet the Flintstones". This version was recorded with a 22-piece big band, and the Randy Van Horne Singers.  The "Meet the Flintstones" opening was later added to the first two seasons for syndication. The musical underscores were credited to Hoyt Curtin for the show's first five seasons; Ted Nichols took over in 1965 for the final season.

The night after The Flintstones premiered, Variety magazine called it "a pen and ink disaster", and the series was among many that debuted in a "vast wasteland" of a 1960-61season, considered one of the worst in television history up to that point.  As late as the 1980s, highbrow critics derided the show's limited animation and derivative plots. Despite the mixed critical reviews at first, The Flintstones has generally been considered a television classic and was rerun continuously for five decades after its end. In 1961, The Flintstones became the first animated series to be nominated for the Primetime Emmy Award for Outstanding Comey Series, but lost out to The Jack Benny Program.