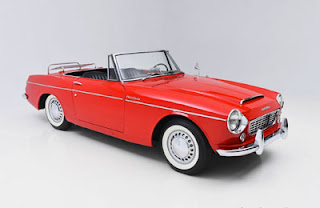 Nissan Motors, one of the first Japanese autos imported into the U.S., originally sold their cars under the Datsun name. Until the 1960s sales were pretty dismal. Then in 1963, they introduced a roadster. Many people thought the Datsun Roadsters were just Japanese copies of the British MGB, but that couldn’t be further from the truth. In point of fact, the Datsun pre-dated the introduction of the MGB by several months, and any styling similarities are coincidental. After 1967, the power and performance of the MGB began to slide down while the opposite was true for the Datsun Roadster. (In Japan, it is known as the Nissan Fairlady.) 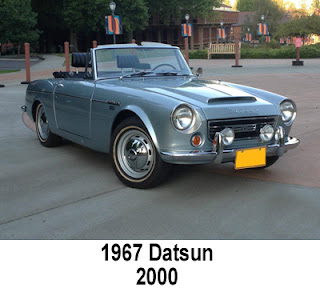 Datsun Roadsters are pleasant-looking with more of a bias toward “cute” than handsome or aggressive, the small hood scoop and stacked taillights are unique features. The majority of existing cars are the earlier versions with smaller engines, known in the U.S. as the 85hp 1500 and the 96 hp 1600 models. The pre-1968 cars had a handsome steel dash with toggle switches and a short windshield. 1968 Datsun 2000 didn’t become available until mid-1967. The difference was pronounced, however. The 135 hp Datsun 2000 was a legitimate “stoplight sleeper” that surprised many who challenged them. Production ended for the roadsters in 1970 when the Datsun 240Z was introduced. 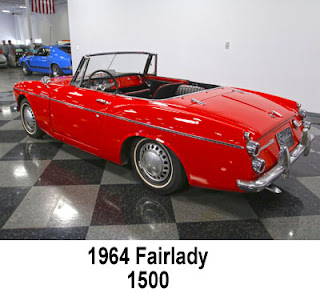 Datsun roadsters raced successfully in Sports Car Club of America (SCCA) raced and continue to be good vintage racers. They’re more durable than most of their British rivals.

I owned a 1964 Fairlady 1500 which I drove through college. I wish I still owned it as this particular model has appreciated in value and have fetched more than $40,000 at auctions.