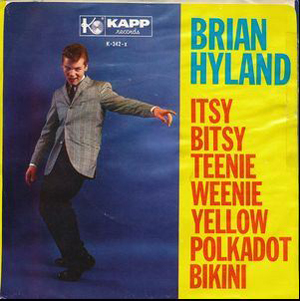 The Itsy Bitsy Teenie Weenie Yellow Polkadot Bikini is a novelty song telling the story of a shy girl wearing a revealing polka dot bikini at the beach. It was written byPaul Bance and Lee Pockriss and first released in June 1960 by Brian Hyland. The Hyland version reached number one on  Hot 100, selling a million copies in the US, and was a worldwide hit. The song has been adapted into French as "Itsy bitsy petit bikini" and into German as "Itsy Bitsy Teenie Weenie Honolulu-Strand-Bikini", reaching number one on national charts in both languages. Several versions of the song have proved successful in various European countries. 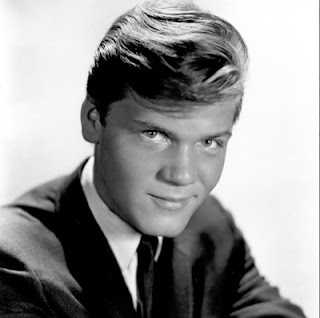 Trudy Packer recited the phrases "...two, three, four / Tell the people what she wore", heard at the end of each verse before the chorus; and "Stick around, we'll tell you more", heard after the first chorus and before the start of the second verse. The song also made the top 10 in other countries, including #8 on the UK Singles Chart. It also reached #1 in New Zealand.

At a time when bikini bathing suits were still seen as too risqué to be mainstream, the song prompted a sudden take-off in bikini sales and is credited as being one of the earliest contributors to the acceptance of the bikini in society. The early 1960s saw a slew of surf movies and other film and television productions that rapidly built on the song's momentum.

For a walk down memory lane, here is the link to the Dave Clark version of the song. Enjoy!